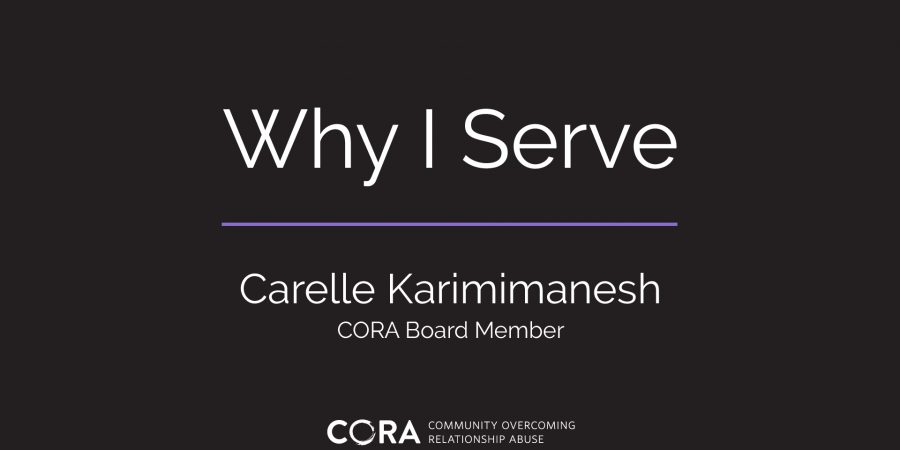 A few weeks ago, during a conversational moment before a meeting, we asked several board members what made them serve? Why were they passionate about ending intimate partner abuse? Passionate to the point of not just supporting CORA, but giving of their time, skills and energy as board members.

The answers they gave were touching and astounding … and we knew we had to share them with you!

We asked them to go home and record themselves telling the story of why they’re committed to CORA and addressing abuse in San Mateo County. We’re presenting them here just as they sent them to us: in their own words, unedited, speaking truthfully, telling their story the way they feel it.

The first board member’s story we’re sharing with you is Carelle’s.

This is what she said ….

“Hello. I am Carelle Karimimanesh. I have been a board member at CORA for about 5 and a half years.

I first heard about the local domestic violence agency about 35 years ago when I attended workshops held in San Mateo by the Reverend Kibbie Ruth.

I claimed I was there to help a friend, but the truth is, I am part of the statistic that 1 in 4 women in the U.S. is a victim of intimate partner abuse.

Though I sought help a few times over the years and I even made a list of items I could pack in the back of my car, I never left.

Eventually, my husband grew so mentally and physically disabled I couldn’t leave because he was unable to care for himself and manage his medications. Unfortunately, his physical, emotional, financial and sexual abuse did not wain with his health.

Shortly before his death in 2013, I attended a gathering at the home of Rosemary Mayer Hintz, a CORA board member and friend of my late daughter. There were about two dozen people there. Some survivors. Some CORA staff. And some board members and other supporters. A survivor and the executive director spoke. And I knew I had to be part of this solution.

Once I joined the board, I plunged into the 40-hour training that is required to work with survivors. I accompanied a survivor to her custody mediation meeting. I had intended to try and volunteer on the hotline but I soon realized I was beyond my abilities and sanity.

I am grateful that I have found kindred spirits on the board and among staff members. People who are dedicated to making a substantive, immediate and ongoing difference in other’s lives.

It lightens my heart to see people making better decisions than I did and being supported in their efforts to improve their lives.”

We’ll be adding more stories from the board very soon.

Follow us on social media to know when those arrive.