4 Ways to Be an "Upstander" about Domestic Violence - CORA 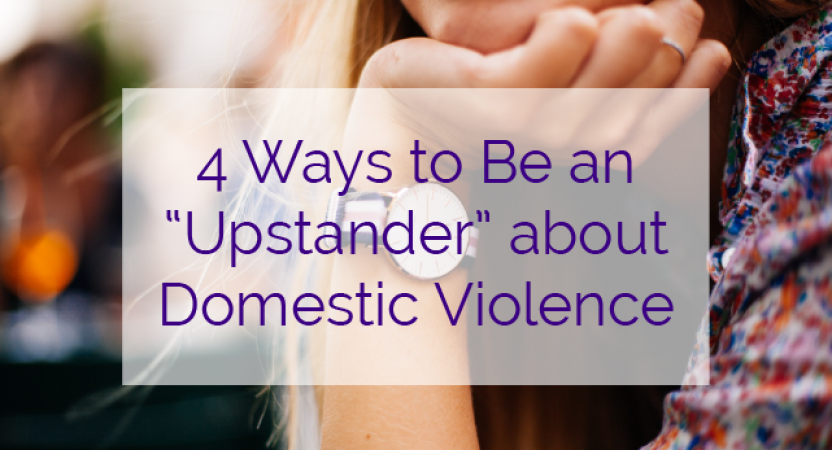 4 Ways to Be an “Upstander” about Domestic Violence

According to the Merriam Webster dictionary, the role of a bystander is that of a silent witness, a “chance spectator.” This definition fits in line with the familiar, pervasive cultural response given to domestic violence and sexual assault: “It’s a personal, family matter – it’s none of my business.” Fortunately, within the last thirty years, activists have made great strides to educate everyday people and shift this definition to improve bystander engagement.

Take for example the “See Something, Say Something” campaign which was launched in 2002 by NYC’s Metropolitan Transportation Authority (MTA) in an effort to combat crime by inspiring the city’s sense of public responsibility. After much success, the campaign was later adopted in 2010 by the U.S. Department of Homeland Security as a nationwide effort to promote community policing and emphasize the importance of citizen engagement. “See Something, Say Something” has succeeded in mobilizing everyday people to engage with their surroundings and poses as a promising, proactive strategy to combat violence in the future. CORA’s new Law Enforcement Liaison, Kathryn Anderson, explains that police officers have long been on the front lines of responding to domestic violence calls, and agrees that the bystander’s role of “Saying Something” is crucial in violence prevention.

Kathryn brings 20 years of experience to CORA as a patrol officer/sergeant, and six years as a detective sergeant hailing from the Redwood City Police Department. As a trained Sexual Assault Counselor from Rape Trauma Services, Ms. Anderson honed her skills to support those impacted by partner violence and has demonstrated a commitment to the San Mateo community throughout her career. Working directly with Kathryn is CORA’s Emergency Response Program Specialist, Emily Flemming, who facilitates the relationship between CORA’s Emergency Response Program (ERP) and 20 police departments in San Mateo County.

The ERP was established in 1994 to improve police response to the San Mateo community by providing immediate, telephone-based crisis counseling to survivors at the scene of 911 calls. Once the officer identifies an emergency call as partner violence, CORA’s ERP hotline counselors are contacted and able to provide crisis counseling and offer a variety of support services. The ERP operates 24-hours a day, 365 days a year to connect those in need to housing, legal, and mental health services. Since the Program’s inception, the partnership between CORA and local law enforcement agencies has positively impacted police response to survivors. Yet as Emily explains, police involvement is just one component to address domestic violence. As everyday citizens, bystanders can engage in more subtle, preventative efforts to discourage partner abuse before it escalates to a 911 call.

While anyone can be a bystander, an active bystander recognizes a problem and intervenes in a way that feels safe and appropriate. Kathryn and Emily break down a number of steps you can follow to diffuse an escalating social situation. With these methods, anyone can contribute to supporting their friends, neighbors, and community members in violence prevention:

1. If you see or hear someone getting hurt, don’t handle it alone. It’s generally best to avoid direct confrontation, as violence occurring between partners is often extremely unpredictable and therefore dangerous to an untrained, solo responder. Call 911 if you witness a situation escalating and remember, “Safety is the number one concern. Don’t try and break up an argument physically, instead act as a detective to collect information and pass it along to trained authorities.” It’s important to keep in mind that there are many unknowns, including the potential presence of weapons and a history of violence.

2. In preparation to contact your local law enforcement agency, do know the following information:
Where (The location of the incident)
What & Why (What about the situation concerns you? Briefly explain)
Who (Who’s involved? Is the aggressor identifiable?)
When (Note the duration of the incident and time of day)

Tips:
If a car is present at the scene, record the license plate number and details about the vehicle. This is an effective way for police officers to accurately track down potential suspects.
If possible, take photos or a video as visual evidence for the officers.

3. If you interact with someone who has experienced abuse, it’s important to remember your role is not to rescue them. Instead, make space for the survivor to share their experience and believe them, rather than criticizing the abusive partner, or making judgments about the relationship. There’s also the option to connect the survivor with anonymous, confidential help from trained, trauma-informed professionals.

4. There are gray zones, or situations that are hard to read, like at a party or a bar with acquaintances, where someone’s behavior might be concerning but not yet crossing the line. Ms. Flemming suggests that when something doesn’t feel right, ask yourself: ‘How might the situation affect those involved? Could the situation escalate if I don’t do anything?’ The Pixel Project, a nonprofit that generates awareness on gender violence, suggests creating a plan of action beforehand so you won’t be stuck in a position unsure of how to respond, and don’t act as a result. Here are some strategies to consider:

Plan for ways to diffuse or redirect a problematic social situation. Practice with family or friends about what you would say and how you would say it. If you’re uncomfortable intervening alone, enlist the help of a friend, bartender, or bouncer as there is safety and power in numbers. For example, ask a harasser for directions or the time, spill your drink, interrupt, or start a conversation. Make your presence known and connect with the person being harassed.

Educate your peers and assume the best of everyone by engaging with a non-defensive, conversational phrase like, “I hope no one ever talks to/about you like that,” which can be used to make the harasser aware that their actions are inappropriate and you’re prepared to hold them accountable.

Both Kathryn and Emily maintain that there’s no “one size fits all” approach to active bystander engagement, so try on different strategies and find a balance between what’s most effective and comfortable for you. As demonstrated in the success of the education campaign “See Something, Say Something,” the goal to leverage the strength of communities and create a culture of bystanders, or “upstanders,” to engage in violence prevention is possible. Also as our awareness on partner violence evolves, we may continue to work and equip communities with social skills, knowledge, and the power to stop violence before it begins.