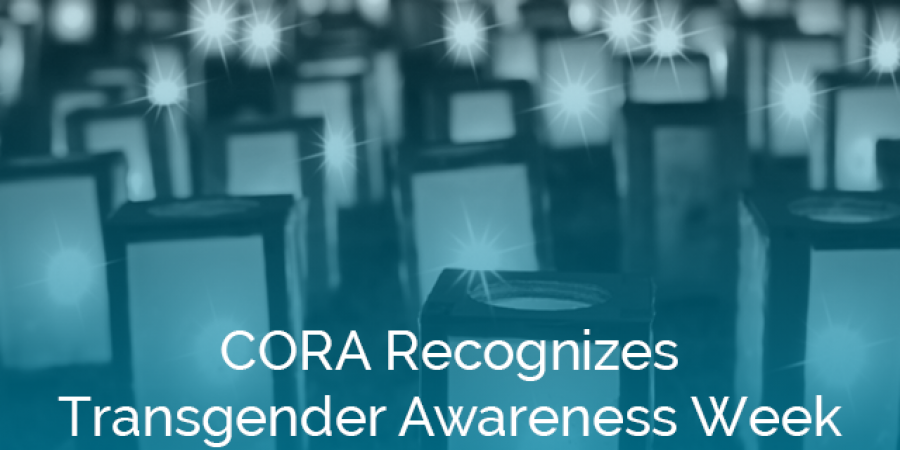 At CORA, we believe everyone has the right to live free of domestic violence. Everyone!

This week individuals and communities around the world commemorate Transgender Awareness Week and Transgender Day of Remembrance on Sunday, November 20th. CORA takes this time to recognize the lives, strength, and importance of trans people in our community. We grieve those who have been killed. We push ourselves as a community organization to deepen our commitment to supporting trans and gender nonconforming people who are affected by relationship abuse.

There have been more known murders of trans people in the United States this year than in any previous year. At least 24 trans people were murdered in the United States in 2016 in crimes that may be related to transphobic hate violence. Transphobia is the irrational hatred of people who do not conform to the rigid gender norms in our society. Of the 24 people killed this year, over half were Black transwomen or transfeminine people. For the past three years, the New York Anti-Violence Project reports that at least 50% of the homicides of LGBTQ people were of transfeminine people or color.

Transgender Day of Remembrance originated from the “Remembering Our Dead Web Project” in 1998, created by transgender activist Gwendolyn Ann Smith as a vigil to honor the memory of Rita Hester, a Black transgender woman who was killed that same year. The first vigil that would become Transgender Day of Remembrance was held in San Francisco in 1999. The day honors the lives of trans people who were killed in murders involving transphobic hate violence. While transphobia is a key piece of the stories of those who have been murdered, Black transfeminine people and trans people of color are disproportionately affected by this violence. Trans people can face many forms of oppression including racism in daily life. Trans people experience housing and job discrimination, lack of trans-affirming and competent health care and social services, state and interpersonal violence, and murder. Trans people who live at the intersections of racism and or poverty experience more violence and higher barriers to accessing services and justice.

Each year, some portion of the deaths reported involve dating violence, partner abuse, and stalking. Quartney Davia Dawsonn-Yochum was a 32 year old transwoman of color who was murdered in March 2016 by an ex-boyfriend. He shot her in broad daylight in front of her supportive housing building in the Skid Row neighborhood of Los Angeles. Anita Nelson, her apartment manager told The Los Angeles Times “I am heartbroken. Our residents are traumatized, our staff is traumatized. Everybody loved her. She was very popular.” Another person killed in August was Rae’Lynn Thomas, a 28 year old Black transwoman who was shot and then beaten to death by her mother’s ex-boyfriend in Columbus, Ohio. While Rae’Lynn was accepted and loved by her family, her mother’s ex who still lived with the women referred to Rae’Lynn as “the devil,” and her family is certain the crime was a hate crime.

CORA stands with all transgender and gender nonconforming members of our community. We are committed to do our part to end the widespread violence against transgender people. We strive to ensure that trans people facing relationship violence have a safe and supportive place to go for shelter, safety, and healing that values and affirms their identity. We are committed to deepening our understanding of the layers of violence and oppression trans people especially transfeminine people of color face. CORA’s shelter is open to people of all gender identities and expressions. Our hotline callers can be readily connected to LGBTQ service providers throughout the Bay Area. We are committed to nurturing partnerships with community organizations that are striving to improve the quality and competency of services available to trans people in San Mateo County.

We know there is much more work to be done. Please contact us if you are interested in collaborating to create communities where intimate partners treat one another with mutual respect, compassion and integrity.

CORA joins several other community organizations in San Mateo in supporting and attending San Mateo’s Transgender Day of Remembrance: The service on Thursday, November 17, 2016 from 4-6pm at Congregational Church of San Mateo, 225 Tilton Avenue, San Mateo. Join us to help create a more inclusive world for all. We will be building a community alter during this event. Please bring flowers, candles, poetry/spoken word to share.