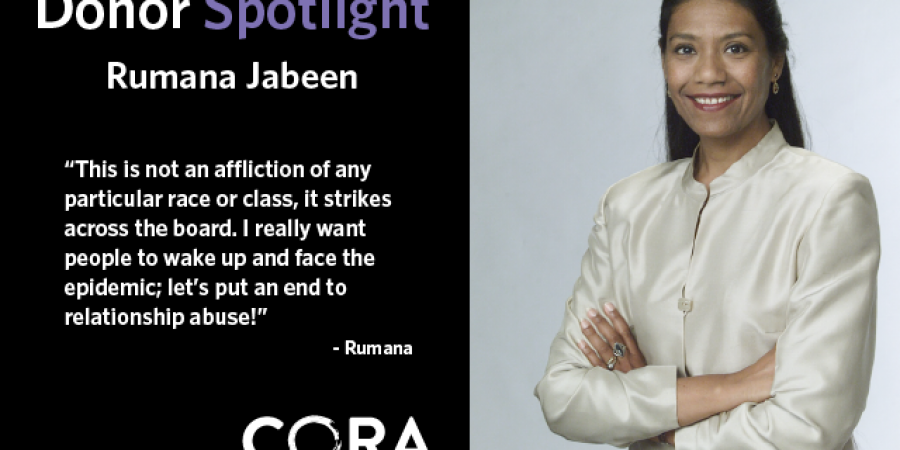 It’s true: it takes a community to end domestic violence. The good CORA does is only possible because of the support of wonderful, caring donors and we’re grateful for each and every one. Together we are a powerful team working to make abuse a thing of the past here in San Mateo County.

It’s important to know your teammates, so periodically we’ll highlight a donor. You can get to know them a little better, see how they got involved and what makes them passionate about the cause. Today we’re highlighting a longtime supporter, Rumana Jabeen.

So, in a nutshell, who is Rumana?
A workaholic. I moved to the US (from Bangladesh) to study Sociology. I went to IUP (Indiana University of Pennsylvania) for my master’s degree. I actually started in English, but switched majors after taking a fantastic Sociology course. I put myself through school by holding several jobs. After college, I also had several jobs. I learned to make lattes at the hippest coffee shop in Tucson, plus worked in a domestic violence shelter. That was my introduction to that particular field.

What do you do for a living?
I am a realtor. I have been helping buyers and sellers in the mid-peninsula for over 15 years. I am associated with Keller Williams now, after starting with Coldwell Banker. Currently I am building a team to take my real estate career to the next level.

How did you first get involved with CORA?
I sought them out. I was very interested in the field after my work in Tucson at a DV shelter. I developed a passion for domestic violence education and prevention. It is a topic that I intend to always stay involved with. When I moved to California, my first employment here in the Peninsula was at a homeless shelter. I was program director for Shelter Network. My husband is a university professor. Comparing paychecks, I realized that in the bay area, I would probably need to make a higher salary. That’s when I decided to go into real estate. But I remain committed to the domestic violence cause.

What makes you passionate about the cause to end domestic violence?
I am struck by the unfairness of it. I am stunned that people remain largely so unaware of the issues surrounding it, while it is so prevalent still! There is such misunderstanding. This is not an affliction of any particular race or class, it strikes across the board. I really want people to wake up and face the epidemic; let’s put an end to relationship abuse!

You’ve worked in the domestic violence field before. What did you learn through that time that you wish everyone in the community was aware of?
I really learned about the people who were being harmed. Victim blaming is the worst part of it. People say “why don’t you just leave?” Well, it isn’t that easy. For one thing, the abuser is a person that they were deeply attracted to initially, and tend to have trust in them. They believe the abuser when they apologize and tearfully say it will never happen again. When the victim starts to realize that it is a pattern, they have already been made socially isolated. Family and friends often are unsupportive, and fail to realize how serious it is. And the community should understand that leaving an abuser is the most dangerous time for victims. The most serious assaults and even murders are committed when the abused spouse dares to stand up to an abuser, or tries to leave. The perpetrators have such control issues that they will do anything to their victim to control them…even kill them. It’s so frightening. But the victim is just that, a victim. There is no profile; they are ordinary people who become subjected to great harm.

Housing is a major hurdle for many when leaving a domestic violence situation. Does your work as a realtor give you any unique insight into that facet?
My husband jokes that I used to do housing for the poor, now I do it for the rich. That is funny, but not true. For one thing, DV victims come from all walks of life. Some very wealthy matrons, even husbands, are DV sufferers. They have so much to lose, and the abuser makes them aware of that. But yea, I would say my work as a social worker helped me to understand how to relate to real estate clients, and my work in real estate helps me understand the difficulties faced by those trying to escape their abusers. It is never easy to pick up and leave. It is like a refugee situation; it is not fair, and it is never easy.

In your business, you say “Aspire Higher.” How does that idea translate for those experiencing abuse?
Thank you for bringing that up. I really believe it. It can be so difficult, but everyone should dare to look beyond their present circumstance and into where they would rather be in life. Have aspirations, and aim toward them. You don’t get far staring at your feet…. Look into the horizon and move yourself that direction. Don’t turn down help. CORA is there to help anyone who needs it. It’s very empowering. That’s why I support them. We can’t get where we’re going on our own; we have to make use of what’s out there. I’m so glad there is a strong organization like CORA to help victims find their way out of potentially life-threatening obstacles.

You can learn more about Rumana and her business at www.rumanajabeen.com.

Tags: AbuseDomestic AbuseDomestic ViolenceDonateDonorMake a DifferenceNonprofit
Share
Call 911 if you are in danger or need emergency assistance. Call our 24-hour hotline if you need to speak with a counselor:
1-800-300-1080
or e-mail us for help at
resources@corasupport.org