A Letter to my Newborn Daughter About Domestic Violence - CORA

A Letter to my Newborn Daughter About Domestic Violence 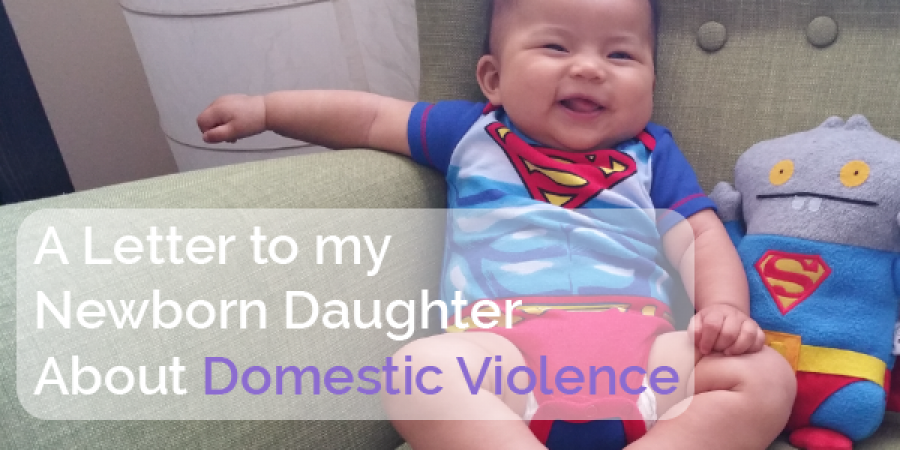 A Letter to my Newborn Daughter About Domestic Violence

When one of our board members at CORA became a mom earlier this year, we knew she’d have a new perspective on talking to your children about domestic violence. We asked her to write a blog addressing how she’d broach this difficult but essential subject with her little one. To be honest, we thought it would be a simple, straightforward blog. What she wrote, though, ended up taking our breath away …. a letter to her newborn daughter.

You are four and a half months old now, and I thank you for giving me the best 4.5 months of my life. Your birthday, March 15, is quite symbolic. It is the Ides of March, the day that Julius Caesar was assassinated in 44 B.C. – the beginning of a new era. In the earliest Roman calendar, the Ides of March also fell on the first full moon of the year. For me, 2016 is a significant year because it is the year in which the first African-American president of the United States is in office while the first woman may be elected into office. A year that will be remembered for incredible opportunities, such as the first solar-powered spacecraft entering the orbit of Jupiter. Sadly, it will also be remembered for tragedies caused by hate. 2016 is the year of the deadliest public shooting in the United States in modern history, where 49 were gunned down at a gay night club in Orlando, Florida. My heart also aches for Alton Sterling, his mother and his son, and the subsequent murder of eight police officers targeted in retaliation for Sterling’s death. In other parts of the world, nine were recently gunned down in Munich, eight of whom were under 20. A suicide bomber killed 80 in Afghanistan, and 36 people perished from the Istanbul airport attack. Who’s still counting?

Perhaps most of all, my heart aches for the 84 people who were mercilessly mowed-down while watching fireworks on Bastille Day in Nice, France – 10 of which were children. A witness stated that after coming out of hiding from a restaurant along the promenade where the massacre happened, he came out to a street littered with blood and bodies. Among the chaos was a wrecked stroller. He did not mention whether there was a child sitting in it, so I kept my hopes up and wished and wished that a parent picked up the child and escaped to a safe place. I will never know, but I can hope.

What can be done? What’s left in our control? Are we becoming callused by these death tolls?

Many of the deaths that have happened since your birth are things that no one could have foreseen. It is easy to feel hopeless among the multiple tragedies that have occurred around us. On the one hand, we can sit and bemoan the victims and scream at all of the unfairness in the world. On the other hand, we can do our best to look out for abuses – abuses that may lead to deaths – that ARE preventable. Death caused by something that happens in each of our neighborhoods that we don’t talk about enough. And there are people we interact with daily but we have no idea of the battles they face at home. They are victims and survivors of domestic violence.

Each year, 10 million people suffer from domestic violence. In San Mateo County, 1 in 4 women and 1 in 7 men will experience domestic violence. Of all violent crimes, intimate partner violence accounts for 15 percent, yet only 34 percent of those injured by partners receive medical care. Over 10 million women and men are abused by their partners each year – nearly 20 people per minute. This also means when you enter kindergarten, a few kids in your class will likely witness abuse at home, and worse, some may have moms and dads who hit them. And moms and dads who hit kids tend to know exactly how hard to hit so that it hurts as much as possible without leaving a bruise.

Why do I care? Because as a mother, I want to protect you from all the dangers in the world. I don’t ever want you to shed a tear because your best friend’s dad stabbed her mom. Years from now, I don’t ever want to see purple marks on your arm or around your neck because your partner got upset that you stayed out too late. No one ever has the right to hit you or anyone else.

When you become old enough to protect people you care about, I want you to look out for signs of domestic violence. Many also suffer silently as their intimate partners abuse them in more ways than one: sexual, emotional or psychological, financial, and via controlling behavior. Men, too, can be victims, and it’s often more difficult for them to reach out because they feel too ashamed. Unless we keep our eyes open for signs of abuse, and unless we talk more openly about it, people won’t know that we care and that it’s okay to ask for help.

Tragedies aside, as I reflect on the kind of world I’d like to see you grow up in, a few hopes come to mind.

I hope that you grow up in a world in which you will not be held to a lower standard because you are a girl, that if you were to climb a tree, those around you would cheer you on, as they tend to more for boys than for girls, rather than tell you to be careful.

I hope that you grow up in a world in which math teachers won’t tell you that it’s okay for you to not be good at math, because “some people are just not math people.”

A world in which if a man rapes or assaults you, people won’t immediately question, “What were you wearing? How much did you have to drink?” That instead, they ask, “What made him think he was entitled to violate you?” “What can we do to make sure he doesn’t do this to anyone else?” and “How can we help make you feel safer?”

But most of all, I hope you grow up in a world in which everyone will feel safe in their own homes. I hope that when you start school, your friends will want to come over after school because they want to, and not because they don’t want to go home. A world in which people will not shake their fingers at you for staying in a relationship with an abusive partner, but be there for you when you feel ready to seek a way out. “It’s easy to judge someone’s choices when you don’t have to make them.”

I hope that one day, you will look out for signs of domestic violence and help people you care about seek help if they are ready for it. It’s a big responsibility, but it’s one that belongs to all of us. Because even one life saved is one life gained.

I feel so lucky to have the privilege of loving and caring for you. To be able to read Brown Bear to you, make silly faces together in front of the mirror, and cheer you on as you kick your chubby little legs in the pool. One day, I hope to teach you how to ride a bike, build a campfire, and make dumplings from scratch. None of the people whose lives were robbed this year will get to experience those things with their children. None of the children whose parents have perished will be able to create new memories with them.

With so much love and hope,

Tags: AbuseDaughterDomestic AbuseDomestic ViolenceLetter to My DaughterNonprofitSurvivor
Share
Call 911 if you are in danger or need emergency assistance. Call our 24-hour hotline if you need to speak with a counselor:
1-800-300-1080
or e-mail us for help at
resources@corasupport.org