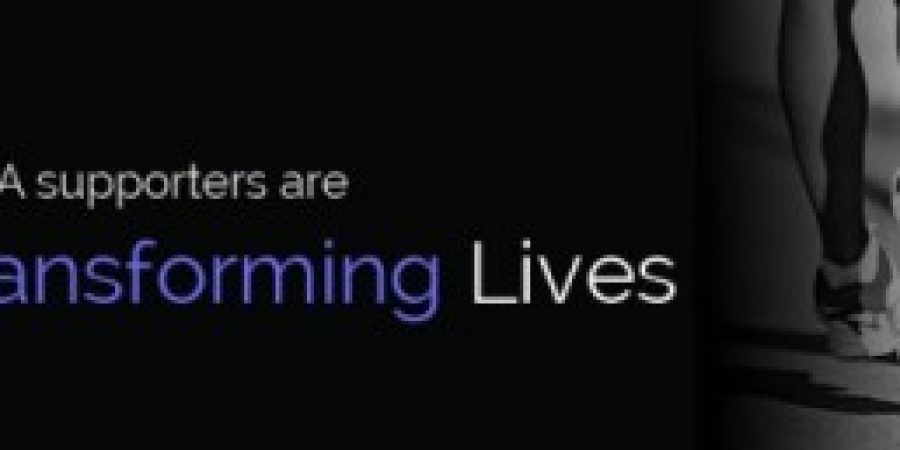 Another bead of sweat trailed down Tanya Edwards’ cheek in the Florida sun. Her legs burned and a tightness had set in over the last few miles. Her lungs pulled in the humid air, grasping hungrily for the oxygen in each breath. The shadow of EPCOT’s iconic Spaceship Earth fell across her as she raised her foot and glided over the textured plastic mat, recording her time. It was the final step of Tanya’s Walt Disney World Marathon. With 26.2 miles behind, she raised her arms triumphantly skyward and a smile erupted across her face.

If you asked Tanya why she ran, she’d give you many reasons. Her health. To test her limits. To have a family experience. She’d also point at the shirt she’s wearing as she unwinds after her marathon and say she’s running to support CORA. 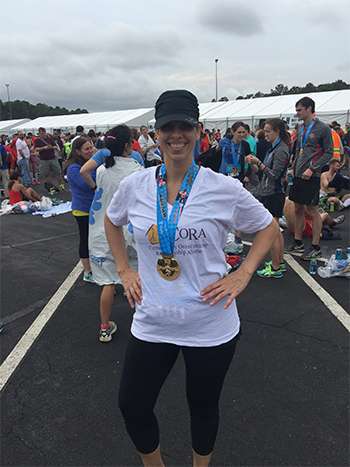 Six and a half years ago, Tanya picked up running. She was in her early thirties and realized she needed to focus more on her health. “I was a former D1 collegiate softball player and after I graduated I literally stopped exercising and eating right until I decided to make a life change to better myself,” she says. “Part of my transformation was incorporating running.”Running turned into racing. One afternoon she opened her inbox and looking back at her was an email announcing the San Francisco Half Marathon. Looking at the screen, Tanya felt sure she was up to the challenge. “I thought to myself, well this is going to be a huge goal but I’m an ‘Edwards’ and I can do anything due to my determination. So, I signed up for the race and purchased a half marathon training book.”

Twelve weeks later, Tanya stood silently at the start line for the SF Half, a race that, as the Wall Street Journal points out, often intimidates even professional athletes. “I completed it faster than I envisioned and never stopped once to walk … so in my eyes, I killed it,” she says.

As Tanya delved deeper into her race training, her mother, Michelle, was getting involved in her own passion by joining CORA’s Board of Directors. Michelle sponsored a table at CORA’s annual fundraiser, so, of course, Tanya came along. Little did she know that this would begin to bring the two – running and CORA – into a single adventure.

Time passed and racing became a regular part of life. Tanya felt happy with the half marathon distance, even going so far as to say the only other marathon she’d run would be the NYC Marathon. That all changed one afternoon when her brother, Jerome, presented her with a truly magical racing option. “My older brother approached me about running the Walt Disney World Marathon and making it a family vacation for his twin 10-year old daughters,” Tanya says.  She had to admit, the thought was appealing. Running with her brother in Disney World, all as part of a fun-filled family vacation…. Despite saying she’d never again run a full marathon, the whole experience of this fanciful and fun endeavor was too great to pass up. “I could run my last marathon with my brother and enjoy it with my parents, nieces and boyfriend! So I signed up for the Walt Disney World Marathon. Florida here we come!” 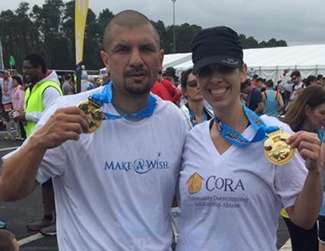 Tanya’s mother Michelle continued to be active with CORA and eventually joined the board. Added to this, Tanya’s boyfriend is a police officer in Daly City, so he’s seen firsthand the tragic effects of domestic violence in the community. “He told me about the connection with CORA and the police agencies in San Mateo County,” says Tanya. It wasn’t long before Tanya was a deeply-committed CORA supporter. “CORA is an amazing organization that is truly living their mission in every way.” So, when her brother mentioned he was thinking of raising funds for Make-A-Wish with his run, Tanya’s ears perked up. Michelle was one step ahead, as Tanya describes it. “My mom said, ‘Why don’t you run for CORA?’ And of course my response was ‘YES!’”

All the training and passion culminated with an alarm clock ringing into the 3 a.m. Florida darkness. Tanya got up, rubbed her eyes and put on her running clothes. She knew when she put her toe on that starting line she would be chasing another goal, another finish line, but this time for an amazing cause. Then she was off, moving swiftly through the early morning air, surrounded by the hum of other runners.

When you ask Tanya what drives her on race day, she’ll initially tell you about the joy of the challenge, but then she’ll talk with a smiling reverence about the ‘runner’s high.’ “It doesn’t happen every run,” she says. “Just the good runs when your body and breathing are in sync and you’re feeling great. You are clear of negative thoughts … you literally feel like you’re running in the sky on cloud pillows.”

Ever runner knows what it’s like to have a bad run, but they still chase the beauty of the runner’s high. It’s about not stopping the race; not giving up running just because it’s bad now. It’s about going on through the darkest of moments. It’s about hope for something better. In that way, being a runner is like escaping domestic violence. It may be harder than it’s ever been. You can feel like you can’t possibly take another step. Then you reach out with hope. Hope that you can move into something soft, joyous and beautiful.

When Tanya crossed the finish line that day, hands raised high, she carried hope to those escaping domestic violence. She’d run an amazing race and raised over $6,000 to help those in need. The smile that spread across her face is just one of many that her event brought. There is also the smile seen on the face of a young woman finding solace in a CORA safe house. A smile spreading wide in a counseling session as healing takes hold. A smile shining on the faces of children who can now sleep peacefully in a home free of violence.

It truly was a race that transformed lives.

What’s your passion? Run, ride, walk, dance, bake, knit, volunteer ….? No matter what it is, you can use it to help those escaping domestic violence.
With everydayhero you can turn your personal passion into making a difference in your community.

Support CORA’s work to end domestic violence with your next adventure. Anything from a marathon to a bake sale can make a difference. Sign up with everydayhero, choose “CORA COMMUNITY OVERCOMING RELATIONSHIP ABUSE” as your charity and start transforming lives!
Tags: CORADomestic ViolenceEverydayheroGivingMaking a DifferenceMarathonRunning
Share
Call 911 if you are in danger or need emergency assistance. Call our 24-hour hotline if you need to speak with a counselor:
1-800-300-1080
or e-mail us for help at
resources@corasupport.org