5 Things We Learned About Domestic Violence from the O.J. Simpson Trial - CORA

5 Things We Learned About Domestic Violence from the O.J. Simpson Trial 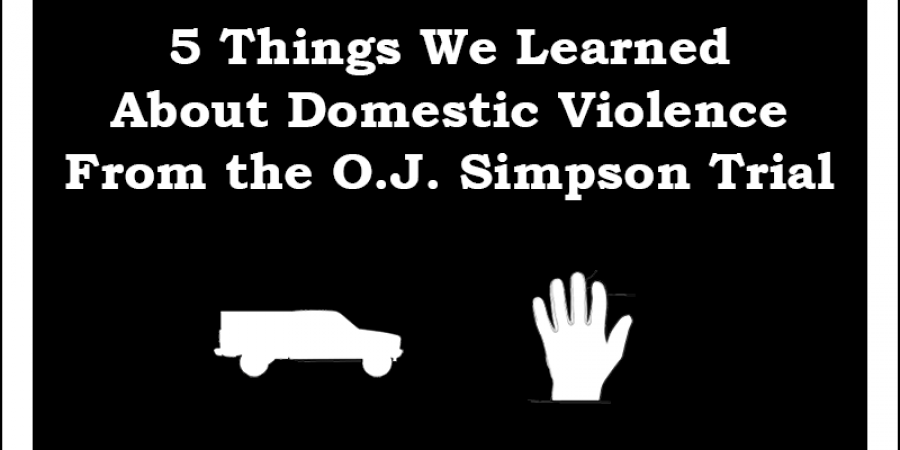 5 Things We Learned About Domestic Violence from the O.J. Simpson Trial

I bet you remember where you were at each moment. The disturbing murder in June 1994. A constant TV screen showing a white bronco making its way through the streets of Los Angeles. A black glove in a wood-paneled courtroom. The breathless moment the entire country stopped to hear the verdict.

his October will be the 20th anniversary of the O.J. Simpson verdict. While we remember so many portions of the “Simpson Saga,” we often lose sight of what predates the courtroom drama: domestic violence.

There’s no need to discuss O.J.  Whether he did or did not do it has been thoroughly debated elsewhere (a civil jury found him responsible for the murders in 1997 and ordered him to pay the victims’ families a total of $33.5 million). What needs to be underscored is that, after Nicole Brown was murdered in her home in Los Angeles while her children were asleep upstairs, it was revealed that Nicole had documented over 17 years of verbal, mental, physical and emotional abuse suffered during her relationship and marriage.

Here are 5 things we learned about domestic violence from the O.J. Simpson Trial:

There is a common belief that domestic violence only happens in low income households. At the time O.J. went to trial he had an accumulated wealth of roughly $11 million plus another $3 million in current income. Regardless of how you measure, it would be hard to see this as low income.

Domestic violence is not a momentary loss of temper.

Many excuse the actions of abusers by saying “everyone loses their temper every now and then.” First, this is a disturbing excuse for abusing another person. Second, domestic violence is a systematic pattern of coercion and control. It includes a number of tactics, including physical violence, emotional attacks, intimidation, threats, economic deprivation, isolation and psychological and sexual abuse. The various forms of abuse are used to exert power and control over a partner.

Domestic violence is not just a “private matter between family members.”

There are those that would say domestic violence is a “family issue” and has no effect on those outside of the relationship. Would we say that is true for the children of Nicole Brown Simpson, Sydney and Justin, who grew up in a household of violence? What about Nicole’s parents and siblings? (Since the trial, Nicole’s sister, Denise Brown, has been a strong advocate for education and awareness of domestic violence. She will be the keynote speaker at CORA’s upcoming Domestic Violence Awareness Luncheon.)

The effects of domestic violence extend well past the victim’s family and into the economic sphere. A recent CDC study estimated the cost of domestic violence on society to exceed $8.3 billion. According to the report, victims lose “nearly 8 million days of paid work-the equivalent of more than 32,000 full-time jobs-and almost 5.6 million days of household productivity each year.” These numbers prove an extension well beyond two people in a relationship.

It’s not easy to leave a domestic violence abuser.

Some will say: “It can’t be that bad if someone stays in a domestic violence situation. Why didn’t Nicole just leave instead of enduring 17 years of abuse if it was so bad?” The short answer is, “Because it’s not that easy to leave an abuser.” Without a doubt, Nicole could have left her abuser at any point and, with California’s legal system, have left financially secure. However, the act of leaving is about more than money and takes more than signing some papers.

People may stay in domestic violence situations for emotional reasons, such as the belief that an abuser will change or feeling that the abuse is their fault. There can also be situational reasons, such as not wanting to subject children to the possible damage of the separation or losing custody of them in divorce proceedings. And, of course, the fear of further escalating physical violence. In fact, when someone leaves an abusive relationship, that person is at a 75% greater risk of being  killed by the abuser than if they stay.

Domestic violence affects a huge portion of the population.

Following the Simpson trial, awareness of domestic violence took its first steps out of the shadows. In a Time magazine article marking the 20th anniversary of the murders in 2014, Rita Smith, then Executive Director of the National Coalition Against Domestic Violence, said: “At that point in time, we were still struggling to get people to understand what domestic violence was. And now that term, domestic violence, is something that most people understand. It’s not something that was universally known prior to those murders.”

20 years later, so much has changed. Compared to the time of the O.J. Simpson Trial, domestic violence is a topic discussed with greater frequency and has become part of the national debate. However, despite these many steps, it is still an issue that lives very much in the shadows of our society. We all must recognize and admit that this human rights issue is in our communities, neighborhoods and homes. And we must talk openly about it. These are small, but essential steps to one day making domestic violence a thing of the past.

Tags: Domestic Violence
Share
Call 911 if you are in danger or need emergency assistance. Call our 24-hour hotline if you need to speak with a counselor:
1-800-300-1080
or e-mail us for help at
resources@corasupport.org